Really great write of the new album from Gatehouse Media's Peter Chianca. "What ultimately makes “Bruisable Heart” such a success, though, isn’t just the resonance of York’s hardscrabble characters but rather how well York marries the keenly observant nature of his songwriting with an appealing southern rock sensibility. Every track on the album is an eminently listenable song that more than stands alone. But like on Springsteen’s “Nebraska” or Johnny Cash’s “American Recordings,” you’re left feeling like they all take place in the same troubled world, and that you’re lucky to have been allowed into it".You can read the full review by clicking here.

The album release will take place on September, 28th at the Lizard Lounge in Cambridge, MA (just outside Harvard Square on Mass. Ave). We' ll on early in the night (around 9ish) and will be playing as part of OldJack's Last Saturdays residency. This is a full band show and it's exciting for me, as I'll have my wife playing bass. She and I actually met at a gig we played together at the Lizard eighteen years ago. Should be pretty cool.

Lots of shows coming up.

Thanks for stopping by. 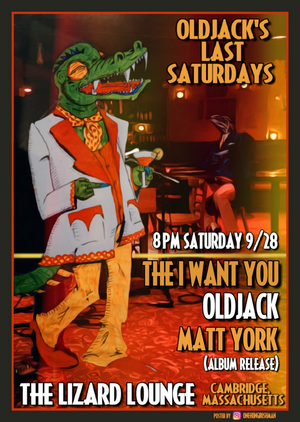