Busy couple of weeks ahead

Thanks to everybody that came down to both Atwood's Tavern and Hard Rock Cafe Boston yesterday. We had a great time. I've got a couple of solo shows this coming weekend. Friday I'm at Dedham Square Coffeehouse as part of 18 Strings Presents: Matt York, Krista Baroni, and Hollis Greene show. On Sunday, I'll be a playing a couple of songs at the Almost Famous 5th Anniversary Concert at the Spire Center for Performing Arts in Plymouth. The following weekend I'm in NYC Rockwood Music Hall on Sunday, May 29th. Next full band show is Dover Music Fest on June 11th. This link has some video from the other night's Hard Rock show. 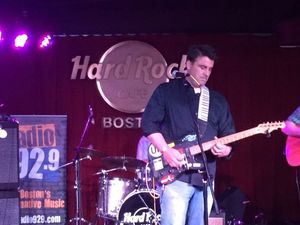